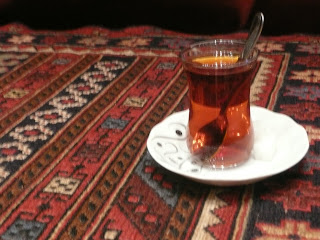 The minute I crossed the road and locked eyes with him I knew I should have turned left. Or right. Or anywhere else.

“Good morning, it’s a beautiful day,” the man called out.

“Where are you going? I have a carpet shop you must see,” he said. Was he actually running to keep up with me or just skipping? I couldn’t tell.

“I’m going to the Grand Bazaar.” I need to get away from this guy, I thought.

This time he was in front of me. “The Grand Bazaar? But why?” he asked, eyes wide open in feigned shock.

I had to stop and laugh. “Because it’s just there?”

“But I am here for you,” he said, emphasising all the right words. “You don’t have to go there.”

Then I hesitated. Big mistake. That was all he needed. “Come, let me offer you some apple tea,” he said, his arms wide open.

I didn’t know how to say no.

This was Istanbul- the city of East and West, of honey-drenched baklava and quite possibly the most persistent shopkeepers on Earth.

If there’s one thing you can expect all Turkish shopkeepers to do, it is to make you tea. I was offered tea every single day I was there. Apple, mixed fruit, regular. I’ve downed them all.

Full-bodied, strong and always black, çay (pronounced ‘chai’) is drunk not in teacups but in small, clear glasses. Sugar is added, but never milk.

Drinking tea is such a central part of Turkish culture that if you go shopping, expect to be offered at least one cup of tea in every store you go to. When you’re a guest at someone’s home, your host is likely to offer tea before anything else.

I joined a tour to a carpet factory on my third day in Istanbul. The factory owner, Bora, began by telling us about single knots, double knots and flat weaves. After 15 minutes of going into the details of silk, wool and cotton carpets, he stopped.

“Now that that’s done, let me be Turkish and offer you some tea,” he said, rubbing his palms together.

There was an empty seat next to Bora so I walked over to join him. He reminded me of my oldest uncle, with his bushy eyebrows and moustache.

“You know why we keep giving you all tea, right. It’s to keep you here longer,” he said, opening a can of Efes beer.

“First, we invite you into our shop. We joke a little, flirt a little and we ask you sit down on a nice sofa. Because we are hospitable, we offer you tea. Then we take out a few carpets and tell you their history.”

“You see, you are sitting down, having a nice cup of tea and looking at beautiful carpets – half of our job is done. You are happy to be here and that way, we have managed to keep you interested in our carpets,” Bora said triumphantly, his brown eyes glinting beneath his thick eyebrows.

He laughed. “Of course it’s real. We really do want to serve you tea, but it is also to keep you here and to stop you from running away.”

I looked at his beer. “You’re not drinking tea, though.”

“No, I’m not. I’ve been drinking tea since before you were born, so this is a nice change,” he said. He leaned closer and put down his drink. “But seriously, we have a saying here in Turkey: ‘One cup of tea leads to 40 years of friendship’.”

He clasped my hands, looked into my eyes and smiled. “We are friends now.”

Six days (and many cups of tea) later, it was time to leave Istanbul.

I was at the Arasta Bazaar in Sultanahmet and about to return to my hotel when a man invited me into his shop to look at his leather jackets. They were beautiful, but I already had one so I excused myself and started to walk out.

“Please. You must at least allow me to make you some apple tea,” he said. I turned and apologised. “I’m sorry, I need to pack. I’m leaving for Selçuk this evening.”

“But that is later. This is now. Let me tell you something- there is always time for tea,” he said, gesturing with his hands. It was 10˚ outside and his shop was nice and warm, so I stayed.

The next morning, far away from Istanbul, I found myself at a transport terminal in a small town called Aydın, waiting for my onward bus to Selçuk.

It was 7 o’clock. It had been a back-breaking, 13-hour bus ride and I was ready to move on and finish my journey. Unfortunately, my bus driver wasn’t.

I watched him through the glass walls of the waiting room, smoking and chatting with other bus drivers, not looking as though he was in any hurry at all. As far as I could see, he was just taking his time.

After 15 minutes, I saw him stubbing out his second cigarette. Finally. I could really do with a shower right now, I thought.

I waited for him to get up, but he didn’t. He continued talking to his friends, laughing loudly and throwing his head back, his ample stomach quivering as he did so. I got annoyed. This was too much.

He looked up and saw me glaring at him through the glass. He grinned and raised his hand.

There in his fingers was what I had feared all along- a small, tulip-shaped glass filled with a clear, reddish-brown liquid- çay.

He shrugged apologetically. I knew what he was trying to say.