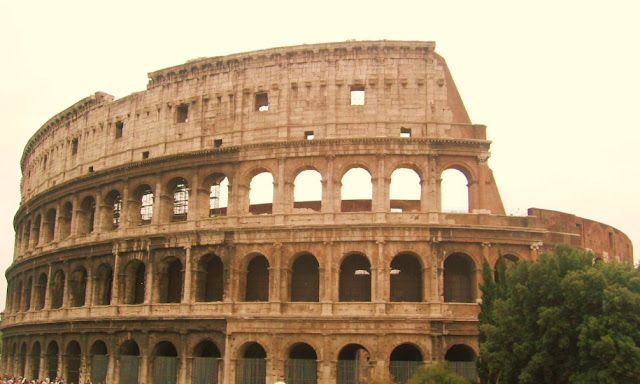 I had walked right smack into an Italian tussle. Two gladiators were brandishing swords and shouting at each other. The taller man, who was particularly loud, looked as though he was ready to eat his opponent.

The brawl ended when one of them fell to the ground. He had lunged at the other man, but had tripped and lost his balance. The gladiator who was still standing laughed as the other man got up and brushed his tunic. None of the spectators around them looked alarmed. A few even grinned.

The setting was perfect- we were outside the Roman Colosseum, the men were dressed as gladiators and they had been arguing in Latin.

Unfortunately the fight wasn’t real and this was the 21st century.

If you like ancient history like I do, you’ll like Rome, an amazing city which was founded in 753BC. If you also like walking, even better- Rome is best enjoyed on foot as the main attractions are located close to each other.

The two major periods in Ancient Rome were the years of the Roman Republic (510BC to 27BC) and the Roman Empire (27BC to 476AD).

The heart of the city was the Roman Forum or Foro Romano, which was the political, commercial, legal and religious centre. Ancient Rome’s main street, the Via Sacra runs through the Forum. This was the route which Rome’s generals used to take through the city in a public show of triumph whenever they returned from a successful campaign in a foreign land, so when you walk along the Via Sacra, imagine the hoards of admiring citizens cheering you on as you enter the Forum.

Beyond the Forum lies the Palatine Hill where the Emperors’ palaces were located. Stand on the edge of the Palatine and see the ruins of the Circus Maximus below, the site of chariot races for which Rome was famous.

Another interesting sight is the complex which houses the Baths of Caracalla (Terme di Caracalla). Built in 206AD, these are the best-preserved Imperial baths in Rome. This complex could accommodate up to 1,500 guests and came complete with a library and sports hall. Blue and white mosaics on the floors of the baths, although faint, can be seen if you look closely.

I had taken the Metro one morning to the Colosseum, the city’s most famous landmark. After agreeing to meet up later with my travel companions, I headed for Stazione Termini.

A local I met told me of plans to expand the underground rail network. The city council hadn’t been able to progress very far, though. They keep finding ancient tombs every time they dig up the city, he said. “This, of course, makes it difficult to build more lines.”

The Colosseum’s formal name is the Flavian Ampitheatre, after the dynasty of emperors which oversaw its construction in 72AD. Its seating capacity was 50,000 spectators. Parts of the arena floor have completely disappeared, allowing us to see the underground barracks and animal cages. From their barracks, gladiators would be transported to the surface via elevators worked by pulleys. The Colosseum was usually uncovered but an immense awning would be hauled into place in case of rain.

It was crowded outside the Colosseum that day. The grounds were swarming with men selling either umbrellas or plastic wind-up toys. That alone did not make it strange; what was odd was that they were from the Indian subcontinent, and spoke Italian.

How long had they been in Italy? Just a few months, said a man from Dhaka, Bangladesh. “But when you speak a language every day, you become good at it,” he said. “You would like an umbrella?”

The two gladiators, now revealed as part-time actors, were enacting their little battle for the benefit of tourists, waving cardboard swords as menacingly as they could.

A foreigner in front of me whipped out his camera. The fight between the gladiators ended immediately and a verbal one began.

“You must pay for photograph,” said one of the actors, raising his hand.

“You must pay,” insisted the Italian.

“What the hell,” the foreigner said, and left the scene.

I watched him walk some distance away and saw him slink behind one of the ice-cream vans. He took out his camera and focused from afar.

I turned back to the gladiators, who by now had stopped fighting. Their audience had disappeared; people had gotten bored of arguing over money.

The tall gladiator took out a mobile phone from within his tunic and began stabbing away at the keys. The other one, who had two silver hoops in his left earlobe, yawned widely.

All around me, Indian and Bangladeshi vendors called out to tourists in English and Italian, their wind-up plastic cars and helicopters whirring on the ground.

This was definitely the 21st century.