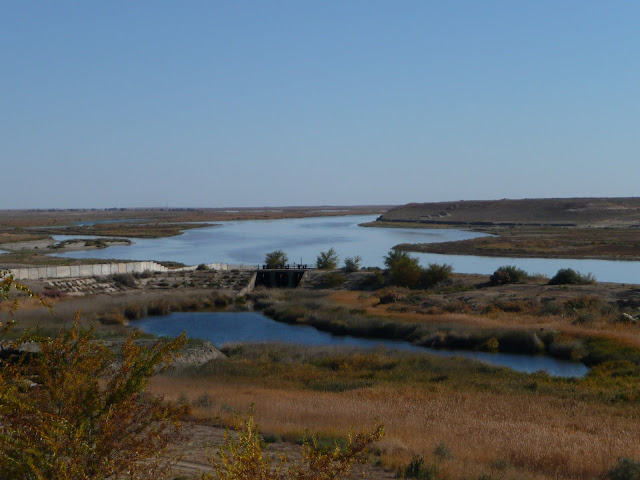 It was a chilly day in October in Baikonur, Kazakhstan when I took this photo. This is the Syr Darya, known as the Jaxartes in ancient times. It’s also the sister river of the more famous Amu Darya, which was known by its Latin name, the Oxus.
I first read about these two rivers in a lovely book called ‘An Unexpected Light’ about author Jason Elliot’s travels in Afghanistan. Both rivers are historically significant- Alexander the Great is said to have crossed the Oxus after an arduous journey through the Afghanistan desert, eventually extending his empire by setting up a walled city on the banks of the Jaxartes. If you’ve ever heard of a region known as Transoxiana (‘across the Oxus river’), this is that very place.
There’s another reason why the Syr Darya and Amu Darya are significant- these rivers flow into the Aral Sea, that body of water which used to be the fourth largest inland sea in the world until its boundaries began shrinking due to extensive Soviet irrigation projects in the 1960s. Worse still, the land and water around the Aral Sea became toxic from years of weapons testing and industrial chemicals use, harming lakeside communities and the ecology in the area.
Here’s an animated map with a timeline showing how much the Aral Sea has shrunk:
The Kazakhstan government and the World Bank are now working together to restore as much of the Aral Sea as they can. Looking at the calm blue water of the Syr Darya, I just hope that they’ll be able to get rid of the pollution at the very least.