If you’re in Luang Prabang and giving too much love to your Beerlao, try to wake up early one morning for a different kind of ritual.

Every day, Buddhist monks walk along the streets of this little town and receive alms from the public. This is the Binthabat, an alms-giving ceremony where food such as rice is offered. This practice has deep religious meaning for Buddhists as they believe feeding and giving sustenance to monks will give them religious merit.

The ceremony takes place at 5.30am, a little on the ‘too early’ side for some, but well worth witnessing.

I was in Laos to attend a wedding and Claire and Elise, two French girls I met there, told me about Binthabat. I don’t remember what time it was exactly but it was still dark when we parked ourselves on one of Luang Prabang’s streets two days later. We thought we were early but a few locals were already there, sitting on the pavement with their pots of rice.

When the monks finally appeared, they brought a lovely splash of colour to the morning: 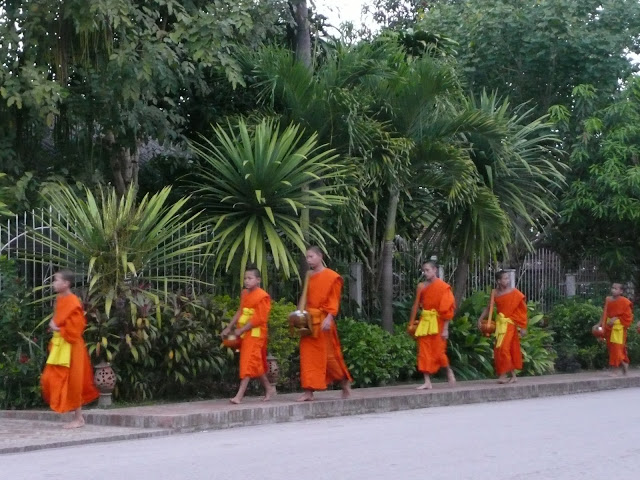 Most of the monks were young boys and appeared to be novice monks. The ceremony itself is very straightforward. Those performing the ritual will wait for the monks to reach them, after which they’ll make their offering.

The ceremony is also performed with great reverence- we saw this lady offering rice without making eye contact from where we sat on the opposite side of the road: 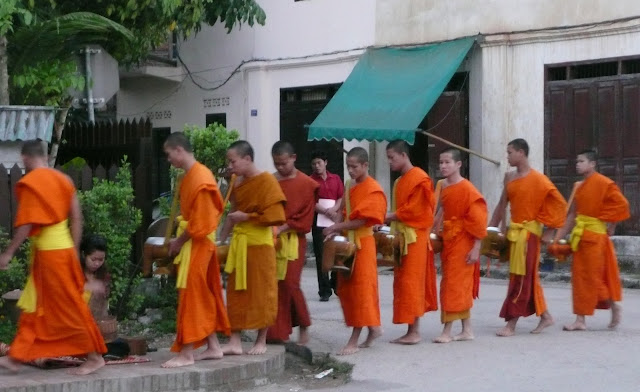 Unfortunately, Binthabat turned into somewhat of a tourist attraction that day. A lot of foreigners went right up to the monks to take photographs. We were even approached a couple of times by traders selling rice and bananas to give to the monks, something which locals frown upon.

If you prefer not to allow these vendors to make money off Binthabat, ask your hotel to set aside a little pot of rice for you. I can’t imagine local hotels not willing to do that since they’ll be cooking rice anyway.

If you’re interested in taking photographs, remember that it’s a religious ceremony, so keep your distance and make full use of that zoom lens.