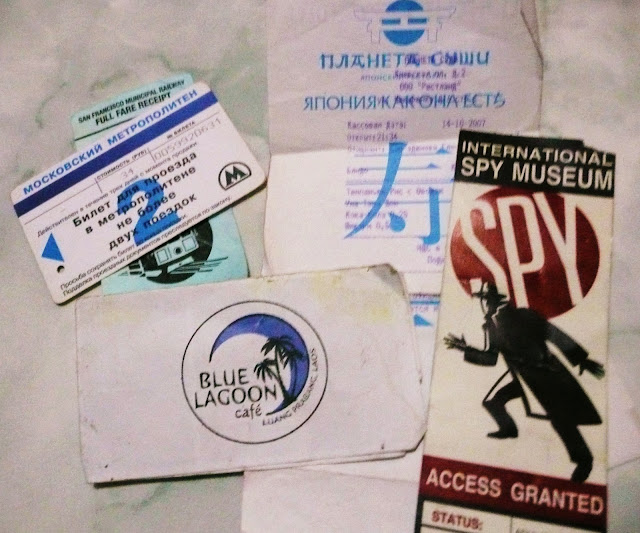 I’d always suspected I was a sentimental fool but now I know for sure.

I’m not exactly a hoarder, but I like keeping stuff, especially things which remind me of my travels. A few days ago I found receipts for dinners I had in Rotorua, Bali and Moscow, business cards from carpet shops in Istanbul and a ticket stub for a movie I watched four years ago with someone I used to have a crush on.

The list goes on. Ticket stubs for museums, heritage sites, you name it. I have them.

A receipt from Planeta Sushi in Moscow took me back to October 2007. That was the day we walked for hours to look for food. I also found a handwritten bill dated February 2008 from Luang Prabang. Breakfast- one pain au chocolat and Lao coffee, strong and black.

One piece of paper stood out, though- a faded, seven-year-old receipt with Chinese characters. It was from ‘Soxworld’ for a pair of socks I bought in Xian in February 2005. I remember that day because it was -3 degrees Celcius and my feet were absolutely frozen. I thought Beijing in winter was cold, but this was ridiculous.

The Soxworld receipt also made me remember the following day. The day after I bought the socks was pretty special. The sun came out and it was 5 degrees. Not exactly tropical, but at least it was above freezing. I got excited when I saw the weather forecast on television, the only thing on TV I could understand. There was a little yellow sun beneath the characters for Xian and the number 5 in bright red. Excited because it was 5 degrees? Yes, I know. Cold weather makes you go a little crazy.

I walked to the Drum Tower Square to find it full of people. Someone had brought a radio and music was playing. Children were running around with their kites, vendors were selling noisy wind-up toys and couples were holding hands. I celebrated with a McDonald’s sundae with extra chocolate topping.

My room is a little neater now but I’ve still got those dinner receipts and museum tickets with me. I’m going to hold on to them for a while. I’ll sort them out one day eventually, but for the moment they’re in my room, ready to be re-discovered two years from now.