Tips for first-time trekkers in Nepal

The Ghorepani-Poon Hill trek is regarded as one of the easiest multi-day treks in Nepal for several reasons. Its relatively low elevation, its short duration (five days of trekking) and the fact that it makes use of clearly-designated paths makes it an ideal introductory trek in Nepal.

From Kathmandu, trekkers take a bus to Pokhara and from there, travel by car to the start of the trek in Nayapul. There are two options for this trek: you can go in a clockwise direction i.e.: Nayapul-Birethanti- Hille-Tikhedhunga-Ghorepani-Poon Hill-Tadapani-Ghandruk-Shauli Bazaar-Nayapul, or you can choose to go in the reverse direction. 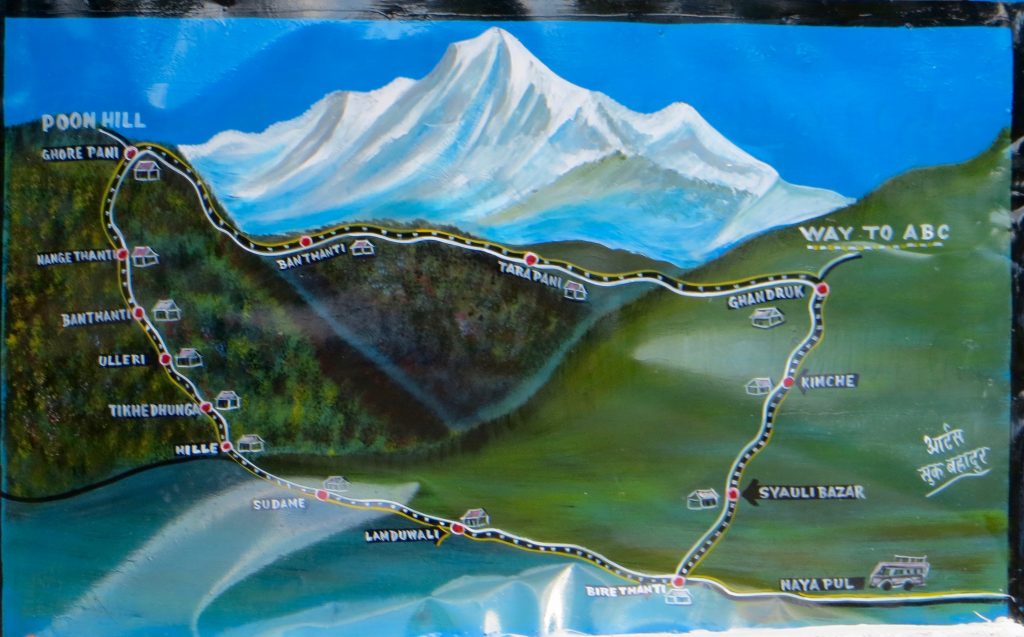 A trek graded as ‘easy’ over here, however, may not exactly be a walk in the park. This is after all, Nepal:  home to Everest, and home to eight of the world’s top 10 highest mountains, and eight of the 14 eight-thousanders (mountains above 8,000m in height). This is where the locals snigger (politely) when you tell them that the highest peak you’ve ever climbed is 3,000 metres above sea level. If you’re new to multi-day treks at anything above 2,500m, chances are you’ll need some amount of preparation.

Here are a few things to remember if you’re trekking in Nepal for the first time.

Train and prepare yourself

There are generally two types of treks in Nepal: base camp treks, and village-to-village treks (which may also form part of a longer base camp hike- the Poon Hill route, for instance, is part of the Annapurna Base Camp trek). Generally, both these categories make use of paths and trails which have been used by locals for decades, and due to the mountainous terrain, often involve an innumerable number of stone steps. 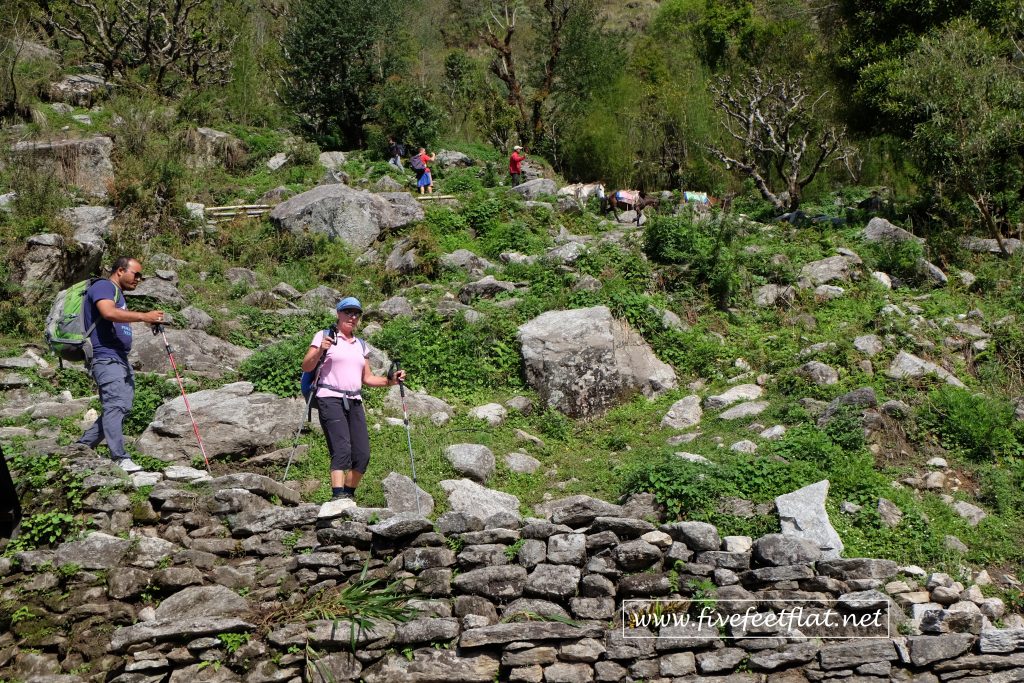 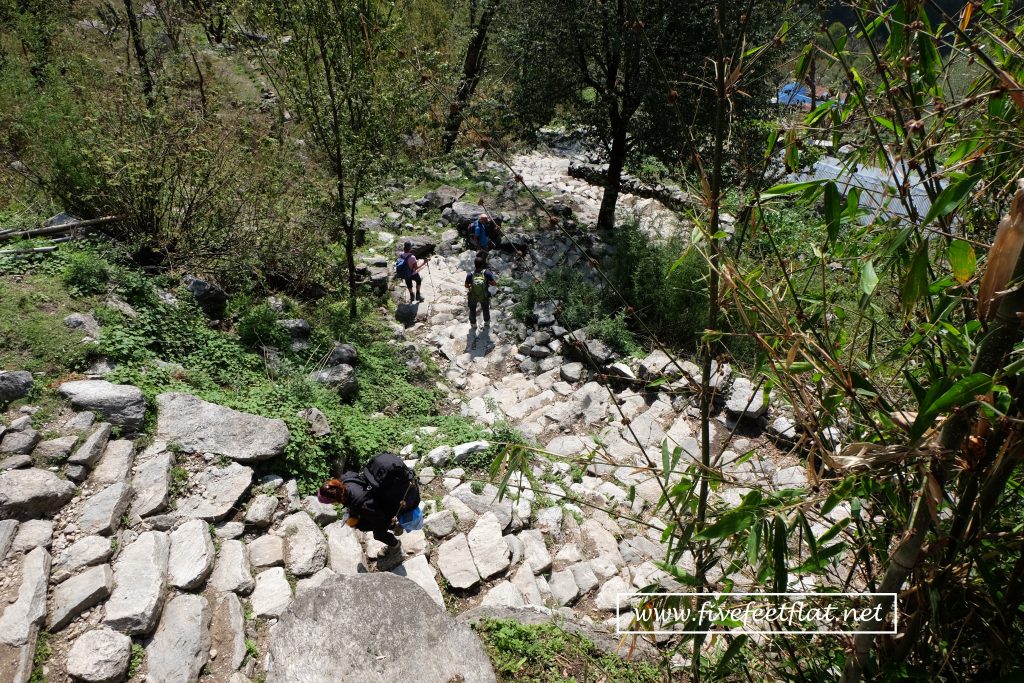 If you love steps, you’ll love trekking in Nepal

These steps are common throughout Nepal and serve to connect mountain villages and settlements. The steps were constructed by the villagers themselves from local stone and are uneven in height and of irregular shape, so some caution is necessary when going down. One single segment of the Poon Hill trek has an incredible 3,200 steps, and that’s just for the first half of the day, so if you’re more accustomed to taking lifts or walking on level ground, you’ll need to do plenty of training. At least three months before you leave for Nepal, ignore the lifts and start going up and down stairs every day.

Use the right gear

The type of gear you’ll need to bring will obviously depend on when you’ll be trekking. Although I usually start by checking the weather forecast, travel forums are probably the best when it comes to figuring out the weather- posters ask practical questions on the type of conditions they can expect and responses are made with the foreign traveller in mind. If you’re going with a trekking company or guide, ask them about the weather as well because they will know whether outdoor activities are actually feasible at a particular time of the year.

Just one of many outdoor gear shops in Kathmandu

I did my trek in early May which, as all good guides will tell you, is the pre-monsoon season in Nepal. What this means is a fairly good chance of rain, some cloudy skies, and temperatures ranging from the 20s at lower levels to the teens and single digits above 3,000m. I brought the following with me: short and long-sleeved merino base layers, one hooded fleece jacket, one hybrid softshell (a softshell jacket with lightweight insulated panels) and one waterproof jacket.

I found anything more than a t-shirt to be stuffy for Kathmandu and Pokhara, while my waterproof shell came to be particularly useful when it rained and hailed on day three. I was also glad I didn’t bring a thick insulated jacket because it would have added unnecessary bulk, weight and warmth even for the 4am climb up Poon Hill (3,210m), which was the only time I used all four layers together. If, like me, you heat up quickly when you walk and trek, you would do better with a layering system which you can remove or add to. Base camp treks have a greater need for thick insulation both due to the higher elevation and the exposed areas you’ll be trekking in.

Although Kathmandu has several reliable pharmacies, it goes without saying that you should bring all medications with you including over the counter remedies that you may prefer or are more familiar with.

A note on altitude sickness: You will be probably be entering Nepal via Kathmandu, which has an elevation of 1,400m. The chances of you getting altitude sickness at this level is low but as elevation affects different people in different ways, pay attention to your body as you go higher, regardless which trek you take. 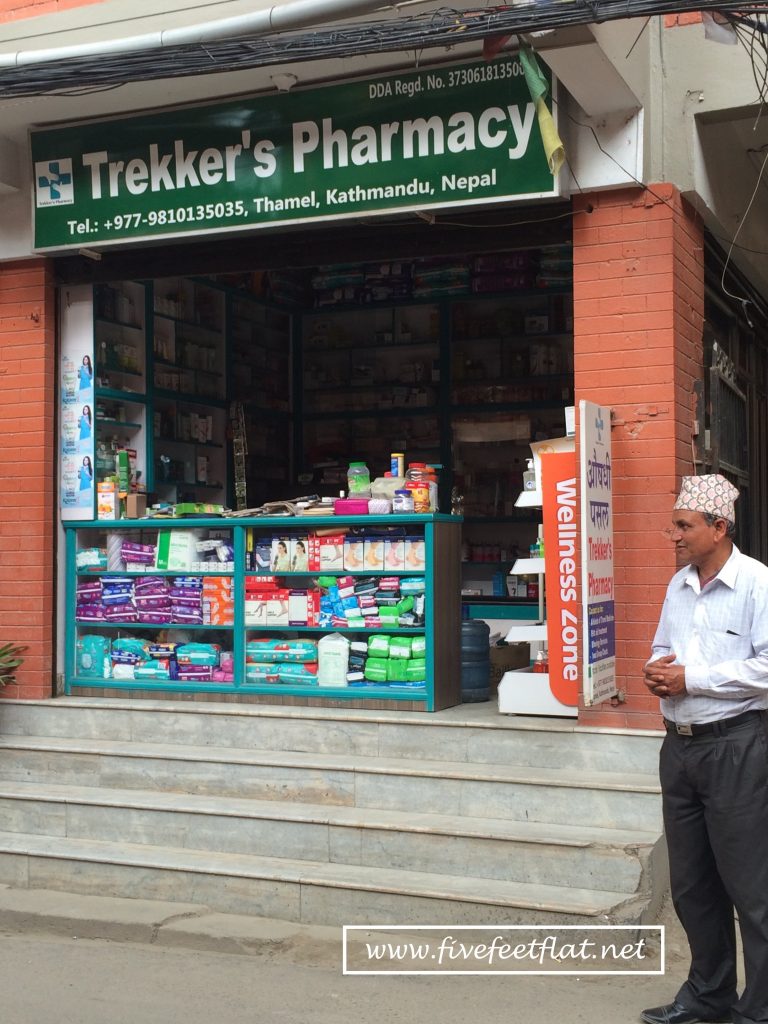 Trekker’s Pharmacy to the rescue!

Symptoms of altitude sickness include headaches, vomiting, loss of appetite, fatigue and dizziness. To alleviate such symptoms, climbers rely on a pill called Diamox. Altitude sickness has very little to do with age or how fit you are as some people feel the side effects more than others. I suffered for two days from diarrhea on the trail, which climaxed on the second day with me throwing up everything that was inside. Although an upset tummy and vomiting are symptoms of AMS, I suspect that what I went through had more to do with something I had ingested. What I am almost certain was a sign of AMS was my lack of appetite (this made my recovery from food poisoning all the more difficult), which disappeared almost immediately on the last day of the trek after we reached lower levels.

To recap: being sick for days on a trek isn’t fun, so pay attention to how you feel and tell your guide if you have any concerns.

Bring a combination of US dollars and if you’re able to change Nepali rupees from home, bring that as well. (Malaysians can change ringgits in Kathmandu, so you may want to bring a mix of USD and Malaysian Ringgit if that’s more convenient). USD are preferred by tour companies and most trekking guides, whereas rupees are for smaller expenses such as meals, snacks, souvenirs, medicines, as well as hot showers and accommodation at guesthouses on the trail. Some guesthouses charge for wi-fi and the use of plug points- note that such charges, just like food and drink, go up the higher you climb. 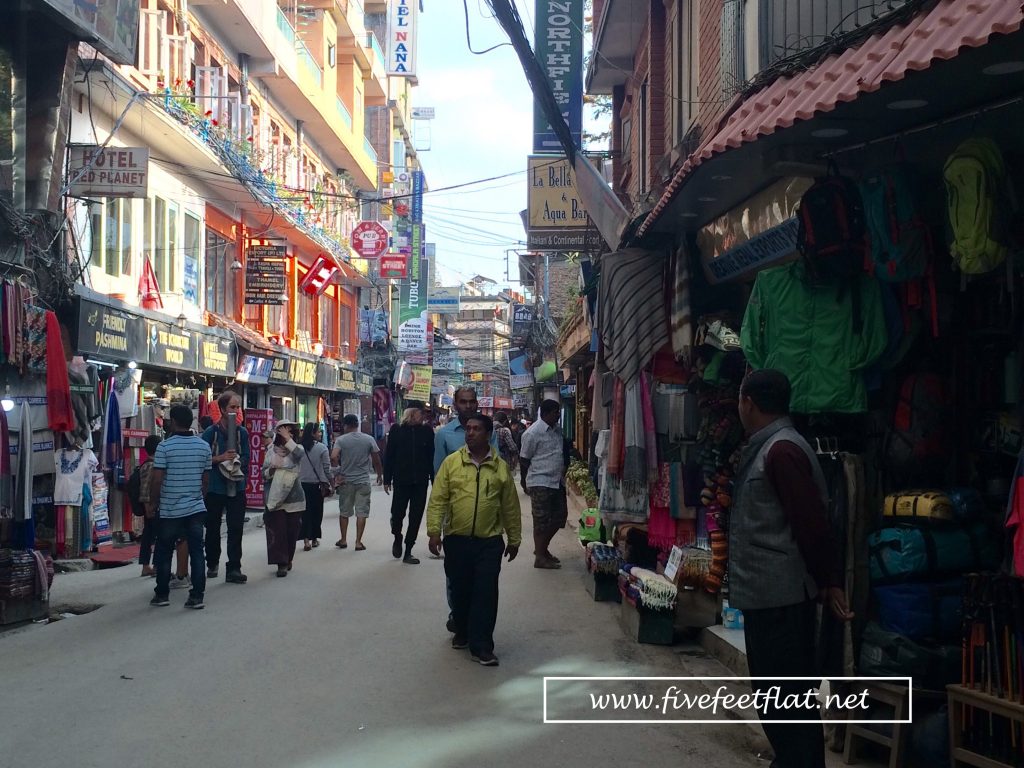 If you’re going on an organised trek and have already paid for it, an additional 1,500-2,000NR for say, ten days in Nepal (in total) is more than enough. Once you’ve paid for the trek, what’s left are the smaller expenses I mentioned earlier, meals which aren’t part of the trekking arrangement and last-minute gear- let’s face it, we all know there’ll always be last-minute trekking gear to buy.

Be prepared for delays

What is travel without a little bit of drama, eh?

The drama began after we left Kathmandu at the start of the trek. We- my guide, my porter and I- were in a 7am bus bound for Pokhara when, two hours after leaving Kathmandu, we rolled up to the Prithivi Highway only to find ourselves in a horrendous traffic crawl. The hold-up snaked all along the hillside as far as we could see. When it became apparent that we couldn’t move, a bus attendant disappeared to find out what was going on and later returned to tell us that a truck had collided with a motorcycle two miles up. It was morning traffic, and the congestion itself was a good six, seven miles long. 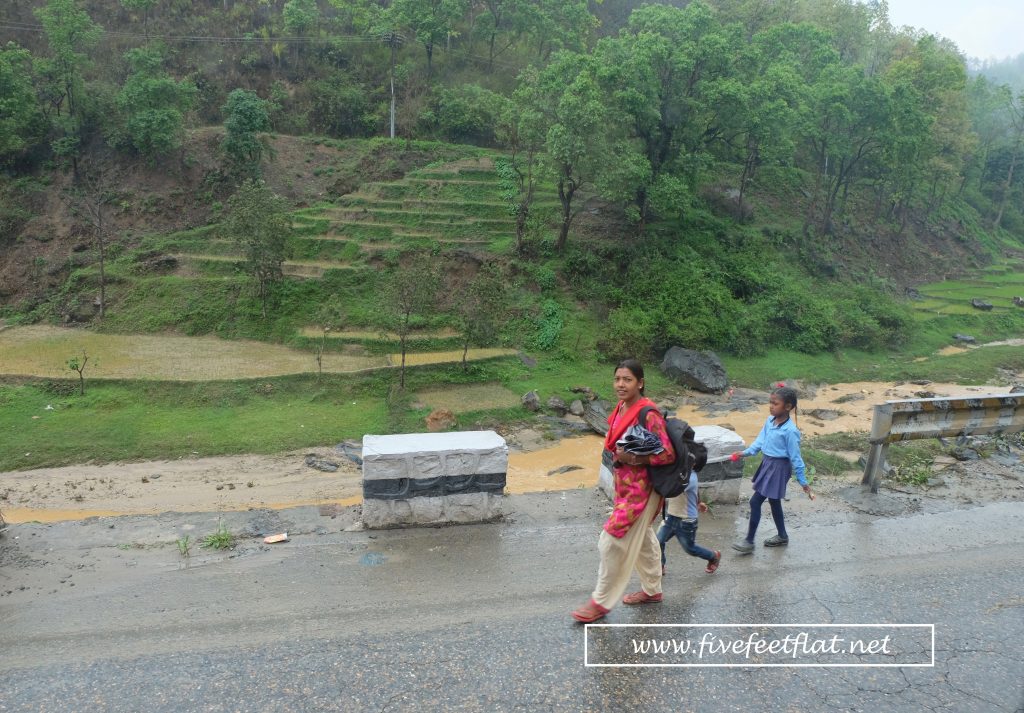 No time to wait in the bus, let’s walk to school instead

Our bus was stuck on the highway for three hours, during which there was much activity- at least four ambulances passed us, wailing as they went (or was it the same one, merely going back and forth?); parents and their children abandoned their buses to walk to school; passengers and drivers got down to smoke and chat; and I took photos of the Trishuli river with its gorges and terraced rice fields. We arrived in Pokhara at six in the evening- six hours later than scheduled.

Challenging road conditions, vehicle breakdowns and the sheer size of traffic all contribute to delays, something which can happen regularly in Asia. Anyone who comes from, lives in, or has travelled extensively in Asia will know this. Delays are infuriating, but if you keep an open mind and not get yourself into a state, you’ll enjoy yourself more.

If you’re planning on signing up for a guided trek, I would suggest picking a reputable and experienced trekking company based in Nepal. An organised trek comes with a guide and a porter- rather than seeing them as an unnecessary expense, this is one way to help the tourist industry and to make sure your dollars go directly to the locals. Also, let’s face it- having a guide makes a big difference if this is your first time in the country. 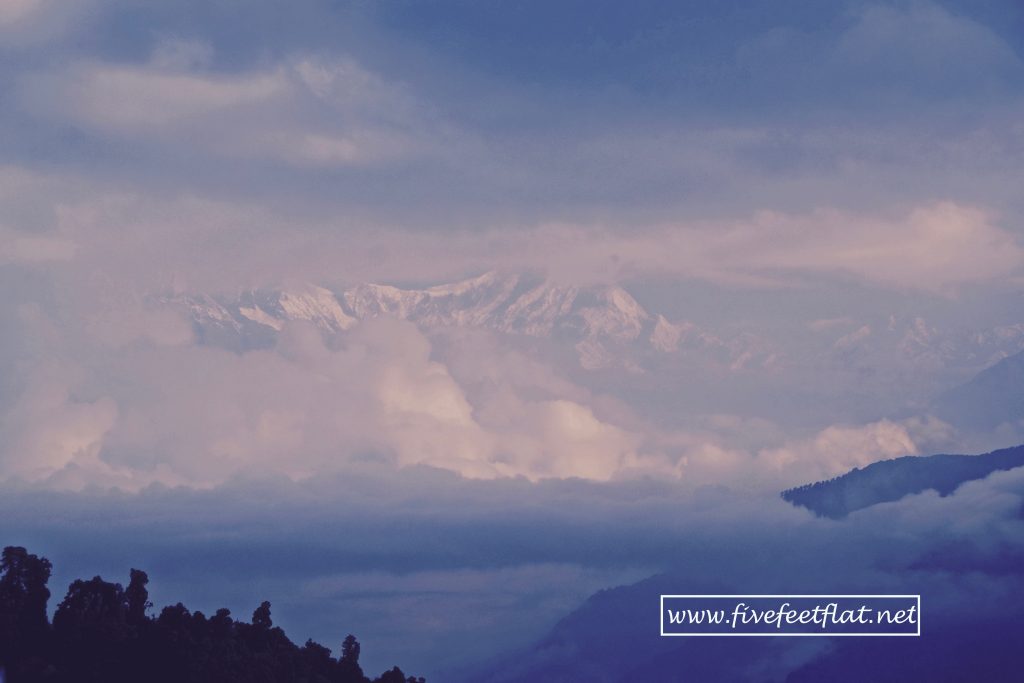 Sunrise from the lower slopes of Poon Hill

After sending out some emails, I decided on Kathmandu-based company Nepal Hiking Team, who were able to come up with a suitable itinerary within hours of my query. They were also very accommodating when I had to change my departure date three weeks before the trip. I would not have enjoyed the trek as much as I did without my guide and porter, who were supremely patient with me on the days when I had my food poisoning! I would be the first to recommend this company to anyone planning a trek in Nepal.

As much as I would recommend Nepal Hiking Team to first-time trekkers in Nepal, an alternative is to trek without a guide and/or porter, or to find a guide and/or a porter after you arrive in Nepal. I saw quite a few foreign trekkers carrying their own backpacks, unaccompanied, so it is clearly possible to trek on your own. However, having carried my own pack for several days on the Cleveland Way, doing the same in Nepal is something I wouldn’t ever want to do. If you prefer to hike without a trekking company or would rather look for guides after you arrive, ask your hotel or look around in Kathmandu or Pokhara. Two full days should be enough for you to sort out your plans.

*This is the first of (at least) two articles on my trek in Nepal, which I paid for on my own dime. I am thankful to Ganga Raj Thapa and Balaram Thapa of Nepal Hiking Team for their support, attentiveness and service. A big Thank You also goes out to my guide Bhim and porter Prem for their help and patience throughout the six days they were with me, especially on those days I was ill.