Hit by a fluke 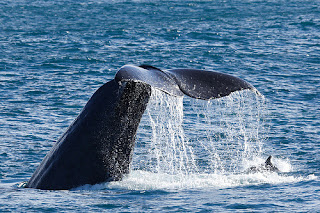 It was the strangest backpackers’ hostel I’d ever seen. Everyone was in their 60s. None of the usual scruffy, young types I could relate to and have meaningful conversations with.
The music playing in the bar – which doubled as the office – sounded like what my granddad used to listen to. A man was nodding his head sleepily in time with the music. A withered old lady stopped me at the door: “Are you lost, my darling?”
This was my hostel in Kaikoura, New Zealand. The only reason I had chosen it was that the price and its location on the coast were right.
My room had a sink, a dresser and a closet. It also had a hideous red bedspread with bright pink flowers. It was late and I was tired, so I decided to stay anyway.
Kaikoura isn’t big, a brisk walk will take you across town in 15 minutes. All the usual facilities – a post office, Internet cafes, more youth hostels, an information centre, souvenir shops, restaurants and the ubiquitous Chinese takeaway – are on West End Parade.
My first visit to Kaikoura was when I was in secondary school, on a drive through the South Island. We passed by a diving shop with a beautiful blue whale painted on the outside and I couldn’t take my eyes off it. When I found out that whales were often seen in the area, I knew I had to come back one day.
It took me half an hour to walk to the whale watching company, which was a little out of town. There was no sign of a storm, which was a relief.  “We won’t sail if the weather looks bad,” the booking clerk had told me the day before.
Our boat was called the Wheketere which means ‘giant squid’ in Maori. A bit ominous, since whales love to eat giant squid.
We sailed from South Bay in extremely choppy waters until we reached the edge of a massive undersea canyon. “We’re talking about a valley 2 kms deep, guys,” our guide said.
“There’s a lot of movement out there but we’re going to wait until we get a clear signal on the hydrophones.”
That didn’t take very long because within a few minutes, we heard clicking noises on the speakers- there was a whale up ahead.
We picked up speed immediately. The captain, who was young and clean-shaven and didn’t look anything like an old sea dog, steered the boat with his back to us. He had no idea what was going on behind him.
Passengers were getting horribly seasick. Some had gotten up to use the bathroom, others were throwing up in their seasick bags, filling the air with the stench of vomit. I’d been on a boat dozens of times before and never gotten sick but holding back on that day was impossible. Soon I was grabbing my paper bag and rushing to the bathroom like everyone else.
Soon after, the boat slowed down next to a large, dark-coloured mass floating on our right. All the passengers, who seemed to have miraculously recovered, leaned over the railings with their cameras.
A sperm whale had come up for air, its head and part of the dorsal hump visible. Suddenly a water spout shot  up through its blowhole, completely without warning. A little girl next to me squealed and clapped her hands.
The whale stayed still for about 10 minutes then it slowly began to move.
Cameras flashed all around me as its body arched forward and prepared to dive. The whale’s ridged back disappeared into the water slowly, then in one breathtaking, fluid movement, up came the tail then it, too, vanished into the depths. It hit me later that night that it had happened all too quickly. It was like watching a favourite moment in slow motion- beautiful, but never enough.
We saw two other whales that day, including one which was so familiar to the crew that they’d named it ‘White Spot’ after the mark at the keel, or base of its tail. As if it knew we are watching, White Spot paused for a few moments and flicked its tail before it plunged into the sea.
Strangely though, something was missing that day. All I’d seen was a large bump and a giant tail. There was no dramatic breach by a killer whale, no humpback song on the hydrophones. Maybe that was for next time.
Four days later, it was time for me to leave Kaikoura and move on. I went to the bar/office/general hang-out place to hand over my room keys. I’d never seen this barman before- he was in his 30s. Much younger than anyone else I’d seen at the hostel.
“Hi, I’m checking out, I had Room 8,” I told him.
“Well now, aren’t you a lucky devil, eh,” he laughed. I told him how much I enjoyed my stay.
“Did you see the whales?” he asked.
“I did… saw three of them in fact. Saw some dolphins as well.”
“That’s brilliant. Thinking of staying with us again?” he asked eagerly.
I know I had to; I hadn’t seen enough of the whales. Then I remembered the awful pink bedspread.
“Maybe another room.”