I haven’t been to very many countries but of all the places I’ve been to, my all-round favourite has to be New Zealand. If I were to migrate, it would probably be to NZ, that boot-shaped country at the corner of the world.

I love the sense of humour which New Zealanders have. They can laugh at themselves and the fact that there are more sheep and cattle than human beings – 32 million sheep and 5.8m cows compared to 4.3m people.  Add the incredible variety in landscapes and that’s enough for me. And what’s not to love about a bunch of people who made bungy jumping famous? I’ve been to New Zealand three times already and I don’t think I’m done.

This was the route I took the last time I was there: 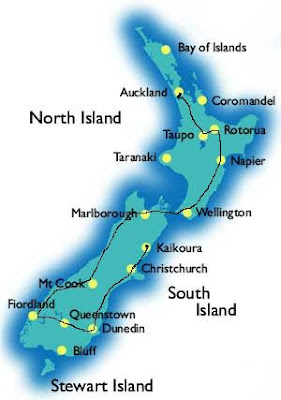 I started in Christchurch in the South Island and worked my way through the country via public transport. I hate package tours, so I took trains and buses plus a connecting ferry to the North Island. I then went on until I reached Auckland, which is where I flew out from a month later.

The wonderful thing about the country is how tourist-friendly it is, particularly for backpackers. I planned the entire trip myself which, honestly speaking, isn’t difficult to do in New Zealand. If you’re travelling independently, have a look at Travelpass and Kiwi Experience for bus passes throughout the country. These options allow you hop on and off your bus along your preselected route, within the validity period of your respective pass. Another is Magic Bus, where you can combine bus travel and hostel stays. If you’re still confused, click here for a list of bus passes.

When I was there, I used the Best of NZ Pass which allowed me to travel by train, ferry and coach. Unfortunately this pass doesn’t exist anymore and has since been replaced by The TranzScenic Rail Pass which, like its name suggests, connects you to its rail network. New Zealand has some lovely train journeys like the TranzAlpine (Christchurch-Greymouth), TranzCoastal (Christchurch-Picton) and Overlander (Wellington-Auckland). I’m not entirely sure why they got rid of the Best of NZ Pass because I can’t imagine it not being popular.

If you’re looking for a place to sleep, I would recommend BBH World Traveller Accommodation. The BBH Club Card gives you discounts in over 300 hostels and guesthouses, but what I really liked was the NZ$20 prepaid phone card which was included in the deal, which I used to make train and bus bookings for onward journeys. There are other accommodation options, of course,  but I wouldn’t be able to comment on them.

Some photos I took along the way, taken from the many trains and buses I rode on:

More on New Zealand after this. Have a good week ahead!