Kaikoura, New Zealand, is a great little place. It’s not very large at all- you can cover the entire town on foot in under 15 minutes. That’s of course, provided you don’t stop in any of the souvenir shops, but then no-one comes here for the shopping.

Kaikoura (‘kye-koe-ra’), which is Maori for ‘a place for eating crayfish’, is located on the eastern coast of the South Island, about one and a half hours from Christchurch. I would consider it a must-see on a visit to New Zealand, both for its amazing landscape and its wildlife.

The coastline is dramatic- craggy and rocky and backed by snow-capped mountains. But that’s only what we see on the surface. Things start to get really exciting about 1.5 kilometres offshore. That’s when the bottom of the sea plunges to a depth of 2kms and where the undersea Kaikoura Canyon begins.

And what happens when the sea gets really, really deep? We get to see whales:

I signed up for a tour with Whale Watch Kaikoura the same day I arrived. Whale Watch conducts marine-based tours via catamaran. The company says it has a 95% success rate, which means that they very rarely don’t get to see whales on a tour, so you’re almost guaranteed a chance of seeing either sperm whales, orca (which are actually dolphins), humpback whales or even blue whales, depending on the time of year. I went in winter and managed to see three sperm whales in one day.

Whale Watch isn’t your only option- World of Whales conducts helicopter tours, which means that just like what their website says, you get to see the whole whale from above, head to tail. The benefit of taking a heli tour also means that you don’t miss out on the incredible scenery around you.

Although all you get to see with Whale Watch is a giant fluke and a dark floating mass, the company is reputed to be the most popular whale-watching tour operator in Kaikoura, and I tend to agree with the majority. It must be amazing to look at a whale from above but when you’re that far up, the experience could be a little detached from what’s happening down below.

The crew on the Whale Watch catamaran uses hydrophones to listen out for sounds made by the whales. In a way, this method detects the whales long before they come to the surface to breathe, allowing the captain ample time to speed up and head for the location of the sound. I’ll never forget that moment when the crew detected our first sperm whale for the day – the guide turned up the volume on the hydrophones and a weird clicking noise filled the boat. There’s no way I would’ve heard that if I’d chosen the helicopter tour.

Whales weren’t the only animals here I encountered up close. The following day, I went seal kayaking (ie. kayaking to a seal colony) with Kaikoura Kayaks. This ended up being one of the best things I did on that trip. I rowed out with my guide Matt to the Kaikoura Peninsula and saw quite a large colony of big fat seals. One of them was rolling in ecstasy in strips of thick kelp and ignored us completely. It’s not easy taking photographs in a kayak but we came across this big guy sunbathing on his rock: 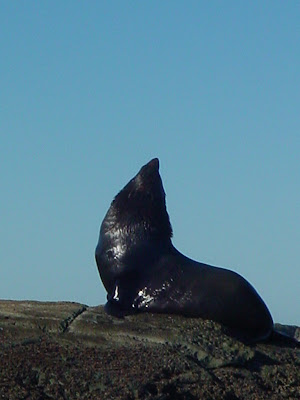 But no, that’s not the end of my story. I was rowing leisurely on our way back after leaving the seal colony when Matt, who had been staring straight ahead, suddenly cried out and told me to row as fast as I could. “I can see dolphins! Quick!” he shouted.

And so I rowed until my arms ached and felt like they would fall off. We caught up with the dolphins but I couldn’t tell how many of them there were; counting them was impossible. Their movements were as fluid as silk, yet super fast.

The dolphins were on both sides of our kayak, jumping in and out of the water. I couldn’t believe what was happening. We were actually racing with a pod of dolphins. We were so close to them, I could hear the sound of air being expelled out of their blowholes.

“I don’t want to hit them with my paddle,” I said, my voice shaking with excitement.

We rowed as fast as we could and raced with them for another few minutes, but they beat us eventually and disappeared into the distance.

I only managed to snap a few blurry photos of the dolphins swimming next to us. This is one of them:

Well, we all know what people say about blurry photos…..it’s just another excuse to go again.